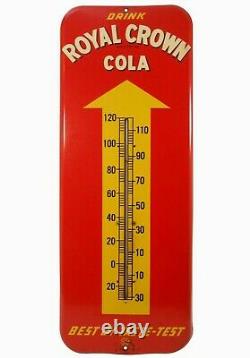 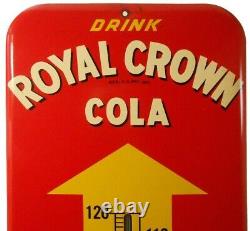 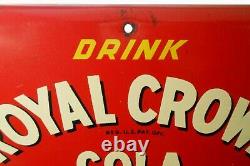 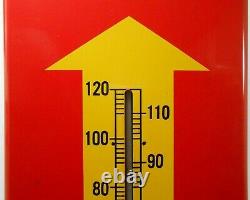 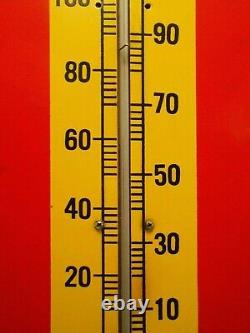 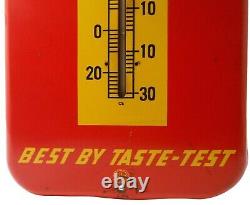 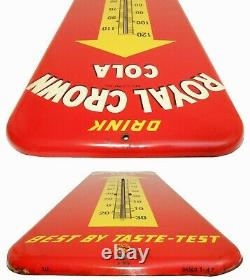 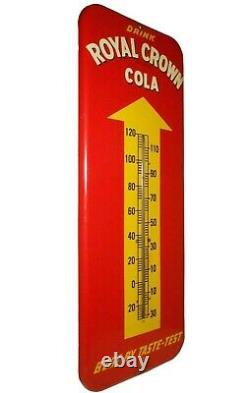 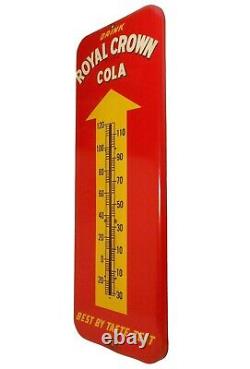 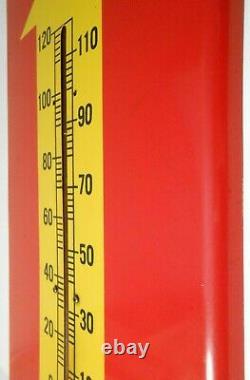 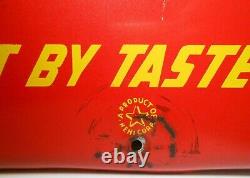 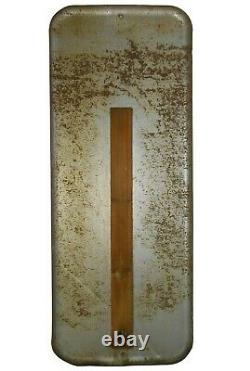 Signed and numbered on the bottom. A product of'Nehi Corp.

In incredibly well-preserved overall vintage condition. Close to how it was originally constituted, with vivid, bright, saturated and nearly undiminished enamel colors and close to undisturbed surfaces. Only the enamel around where the top and bottom perforations are found, shows evidence of the where the metal fasteners, holding the signage to the wall, slightly disturbed the enamel coating. Only the bottom margins of the thermometer show any signs of it being stored off the wall on a hard surface, after it was at some point decommissioned and removed from the wall where it must have hung for years and years in a store, pharmacy or five and dime department store.

Most likely produced just after the conclusion of WWII, RC or Royal Crown Cola, was at one point, even more popular than Coca-Cola and was a nationwide, recognizable cola soft drink beverage brand. The lithographed enamel advertising wall thermometer, has great upward pointing arrow graphic iconography, with curved, shadowed, high case font, arcing across the sign's top. Only the back of the thermometer and the exposed, unpainted tin on the thermometer, where it would have rested against a wall, show some slight, minor surface oxidation. The lithographed enamel facia of the wall thermometer is nearly unscathed.

There's no visible oxidation, noticeable scuffs or unsightly loss or abrasions on the thermometer's facia. The glass thermometer is original, present, intact and undamaged. It would be difficult to ask for an authentic, original and real, vintage advertising wall thermometer, now some 67 to 77 years old, to have any better color or surfaces than this.

Incredibly, not a contemporary facsimile of the real thing but the real thing. As if God put a little parachute on it and dropped it out of the clouds, allowing it to effortlessly float down to Earth, where mere mortals, such as ourselves, would rejoice at what a miraculous discovery finding it, truly was.

Not the same-old, same old. To die for well almost.

What's on your walls? You won't find another this good, that's not a worthless re-pop. Very Good to Excellent overall vintage condition.

This item is in the category "Collectibles\Advertising\Soda\Royal Crown/Nehi/Diet Rite". The seller is "modsanctuary" and is located in this country: US. This item can be shipped worldwide.