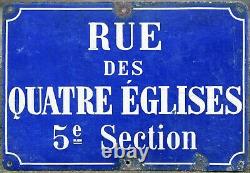 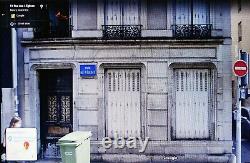 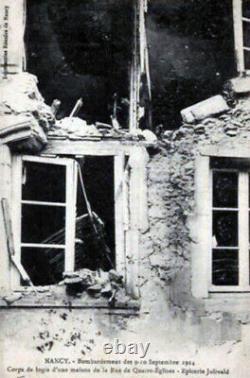 1900s, domed, white enamel in relief. Originally mounted on a wall by the corner holes and then crudely redrilled in the centre for mounting on a post.

Nancy was the third most aerially bombed city during WWI. Fifty-one months of bombing saw 100 houses destroyed and 800 damaged - no information found for other buildings. There is every likelihood that this sign was temporarily repositioned during WWI. How many survived and were retained? The third image is of a grocery shop in rue des Quatre-Églises after it was bombed in September 1914.

The road, now 601 metres long (657 yards), was created in 1590 under the rule of Charles III of Lorraine. He extended the city by building a block to the south, starting from the Central Market. The road was first named rue de la Grande-Église, after the Carmelite church of the same name. Then rue des Églises and in 1728 rue des Quatre-Églises.

From 1791 to 1814 it was renamed Rue de la Révolution and then reverted. The churches no longer stand as places of worship. The road is now indexed as either quatre or 4 églises - confusing if you are looking for one but your street map lists only the other.

Please see the second image, a recent Google street image. The item "Old blue French enamel street sign road rue des 4 Quatre Eglises churches Nancy" is in sale since Thursday, February 11, 2021. This item is in the category "Antiques\Architectural Antiques\Signs". The seller is "frantique2000" and is located in LEEDS. This item can be shipped worldwide.