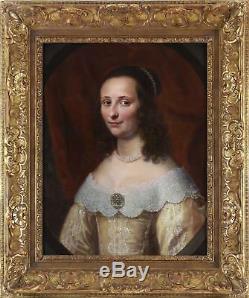 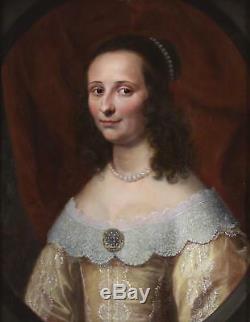 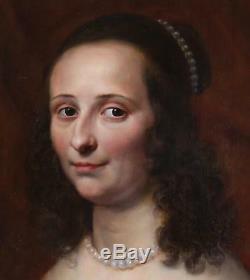 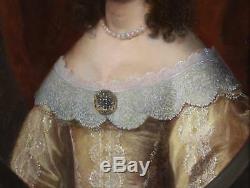 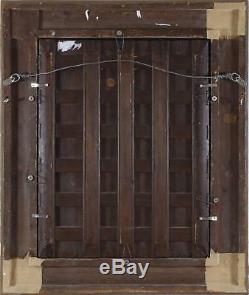 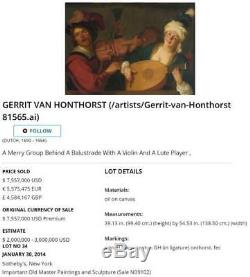 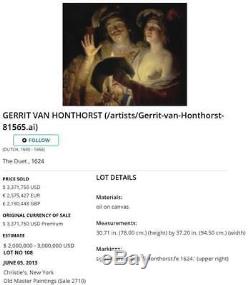 Some examples of works by Gerrit van Honthorst are included at the end of the photos. Frame: Set in the original, high quality giltwood frame. Condition: Painting and frame are both in very good condition for the age. There are a few areas of re-touching to the background, in her hair, and a few scattered spots on the dress. Measurements: Painting measures 62 x 48cm and the overall frame 87 x 73cm.

Biography: Gerard van Honthorst (November 4, 1592 - April 27, 1656), also known as Gerrit van Honthorst and Gherardo della Notte, was a Dutch painter of Utrecht. He was brought up at the school of Abraham Bloemaert, who exchanged the style of the Franckens for that of the pseudo-Italians at the beginning of the 16th century. Infected thus early with a mania which came to be very general in the Netherlands, Honthorst went to Italy in 1616, where he copied the naturalism and eccentricities of Michelangelo da Caravaggio. Home again about 1620, after acquiring a considerable practice in Rome, he set up a school at Utrecht which flourished exceedingly. Together with his colleague Hendrick ter Brugghen, he represented the so-called Dutch Caravaggisti. In 1623 he was president of his gild at Utrecht, where he married his cousin. He soon became so fashionable that Sir Dudley Carleton, then English envoy at The Hague, recommended his works to the earl of Arundel and Lord Dorchester. In 1626 he received a visit from Rubens, whom he painted as the honest man sought for and found by Diogenes. The queen of Bohemia, sister of Charles I of England and electress palatine, being in exile in the Netherlands, gave Honthorst her countenance and asked him to teach her children drawing; and Honthorst, thus approved and courted, became known to her brother Charles I, who invited him to England in 1628.

There he painted several portraits, and a vast allegory, now at Hampton Court, of Charles and his queen as Diana and Apollo in the clouds receiving the duke of Buckingham as Mercury and guardian of the king of Bohemia's children. Charles I, whose taste was flattered alike by the energy of Rubens and the elegance of Van Dyck, was thus first captivated by the fanciful mediocrity of Honthorst, who though a poor executant had luckily for himself caught, as Lord Arundel said, much of the manner of Caravaggio's colouring, then so much esteemed at Rome. If you are collecting in person and wish to pay cash that is fine too.

Some countries are prone to import delays which are beyond our control, although we will do all we reasonably can to help resolve any problems that may occur. Please don't hesitate to ask any questions you may have. We will always try to reply promptly. We will leave feedback as soon as feedback has been received so that we know the item has arrived safely. Get Supersized Images & Free Image Hosting.

The item "Circle Gerrit van Honthorst (1592-1656) Antique Old Master Oil Painting Portrait" is in sale since Friday, March 22, 2019. This item is in the category "Art\Paintings". The seller is "europa-artwork" and is located in Wokingham.