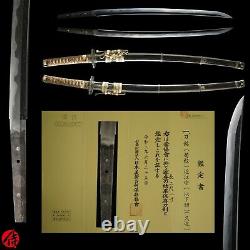 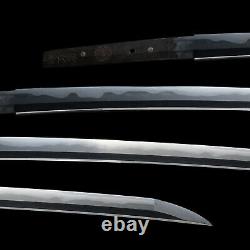 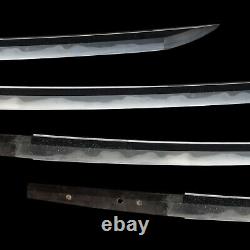 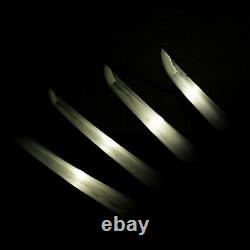 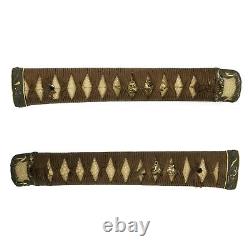 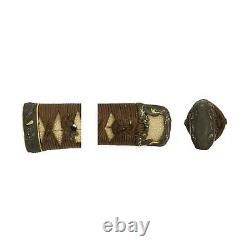 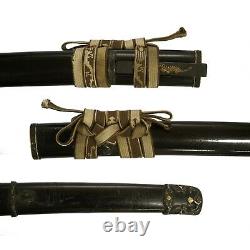 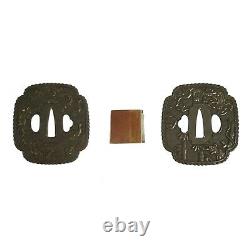 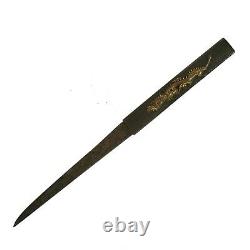 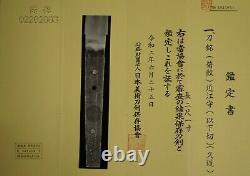 Hisamichi is a swordsmith in Yamashiro province(todays Kyoto prefecture) in the early Edo period. He studied sword forging techniques under the master, the second-gen Iganokami Kanemichi, one of the most well-known swordsmiths in Yamashiro province. He received the honorable title of Omi No Kami in 1661. The emperor back then gave the title of Kami to those who were excellent at sword making.

After receiving this title, the swordsmith added it to his makers name when he signed his swords, such as Omino Kami Hisamichi. Hisamichi was also known as one of Gokaji. (five most prestigious swordsmiths in Kyoto)He was allowed to inscribe a chrysanthemum emblem, which is the symbol of the Japanese emperor. His sword forging technique was so great that the emperor allowed him to use this emblem, which was quite honorable for any swordsmiths.

A chrysanthemum emblem remains in the tang of this blade. Although the signature Hisamichi was cut due to the size adjustment in the past, NBTHK concluded it was forged by Hisamichi based on the blades characteristics.

Hisamichi established the school called Ouminokami Hisamichi Ke, which played an essential role in Mishina school, a prestigious sword school in Kyoto in the Edo period. This sword has a Hozon certificate issued by NBTHK.

This authentication paper was only given to Japanese swords, worth preserving by Nihon Bijutsu Touken Hozon Kyokai(the Society for the Preservation of the Japan Art Sword). The blade is in excellent condition, and the beauty of the Hamon and Jihada is worth mentioning. It accompanies by the intricate sword mounting as well.

The blade pattern created by the tempering process. Visible surface pattern on the steel. Nakago is the tang of the Japanese sword. Japanese swordsmiths left the black rust on the tang because it prevents red rust while the tang is in its handle.

And the discoloration of the tang was created over time, and it is a great indicator for a Japanese sword specialist to estimate when the sword was forged. Koshirae is the mounting of the Japanese sword. There are several parts that consist of Koshirae such as Saya(Sabbard), Tsuka(Handle), Tsuba(Handguard). A pair of matching sword fittings that cover the upper and bottom parts of its sword hilt.

The dragon pattern decorates this Fuchi Kashira. Especially at Kashira, two dragons are facing each other and twist their bodies as if they follow the shape of the handle.

Initially, the dragon is an imaginary creature that is regarded as a symbol of auspicious signs. Its body is likened to nine animals: antlers are deer, the head is a camel, eyes are demons, the neck is a snake, belly is Mizuchi (, mythical animal in Japan which looks like a snake and have a horn and four legs), scales are fish, claws are falcons, palms are tigers, and ears are cows.

It was thought that the dragon would reign at the top of all animals because of its odd-looking appearance. Japanese people appreciate this beast motif as the all-purpose auspicious pattern. Tsuka is the handle of the Japanese sword and Menuki is its decoration. Samehada(Stingray skin) is applied on the surface of Tsuka.

The handle wrapping(Tsuka Maki) is aged as you can see in other photos so we can replace it to a new silk lacing if you request. Tsuba is the handguard for the Japanese Sword and Habaki is the equipment to make the blade not touch its scabbard inside. It prevents the blade from getting rusty and chipped. Dragons and fishes are designed on the surface.

In Japan, since there is a belief that believes the dragon is the God of water, it could consider that dragons were designed in combination with aquatic creatures. On the backside of this Tsuba is decorated with dragon and tiger motifs. According to a theory, tigers have the suns power and would protect people from evil spirits. This Tsuba combines auspicious motifs in the contrasting position of the sky and the land. Saya is the scabbard for the Japanese sword.

Kozuka Kozuka is a small knife stored in Kozuka Hitsu(groove of the sheath of the Japanese sword). Kogatana (small knife) is stored in the Kozuka. A dragon is engraved as well as other parts.

The sword mountings of this sword were designed with this common motif. NBTHK Hozon Certificate for the blade.

NBTHK, also known as Nihon Bijutsu Touken Hozon Kyokai (the Society for the Preservation of the Japan Art Sword), is one of the oldest Japanese sword appraising organizations in modern-day Japan. They authenticated the blade on April 1st in the 15th year of Heisei (2003). They appraised it as Hozon Touken, the blade worth preserving for Japanese society. The purchaser will receive this original certificate as well.

The Board of Education in Nigata prefecture issued a registration paper for this sword. In order to obtain this paper, the sword needs to be traditionally hand forged.

And we would like you to expect at least 2-3 months for your order to arrive at your given address after you ordered. USA, Canada(BC, AB, ON), Mexico, Australia, UK, Germany and France. As long as we can send antique Japanese swords by either EMS or UPS(USA only). We use package cushioning to protect the item and put it in a PVC pipe, which is one of the most secure packages because of its durability.

It will normally takes 5-14 days for the item to arrive at your given address after we dispatch it. Please note that your use of e-bay is governed by the following terms. These Terms are between you and Samurai Museum and govern our respective rights and obligations. We deal with original edged samurai swords, which might be dangerous if wrongly used.

Samurai Gift is not responsible for any lost package that is incorrectly addressed due to customer error. Please also bear in mind that damage or loss caused by custom or post office is beyond our control. Thank you for checking our item.

TO CHECK MORE ANTIQUE JAPANESE SWORDS FOR SALE. The item "350 years old early Edo Period Katana signed by Hisamichi with NBTHK Hozon Paper" is in sale since Wednesday, February 24, 2021. This item is in the category "Antiques\Asian Antiques\Japan\Swords". The seller is "samuraimuseum888" and is located in Shinjuku. This item can be shipped to United States, Canada, Mexico, Germany, Japan, France, Australia.