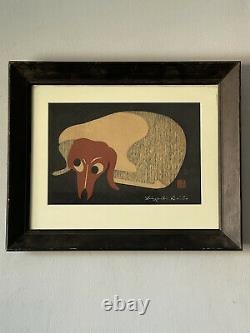 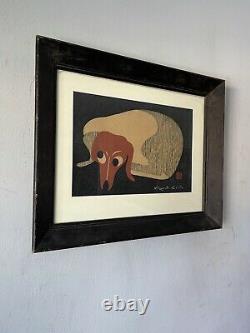 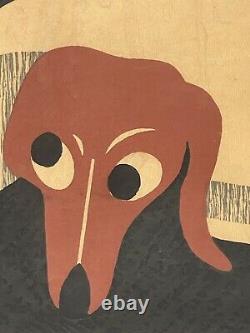 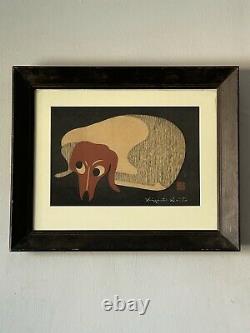 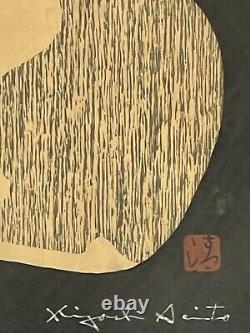 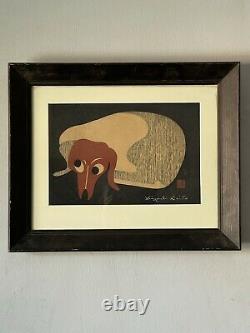 KIYOSHI SAITO (Japanese 1907- 1997). DIMENSIONS INCLUDING THE FRAME: 18H x 22W. Kiyoshi Saito was born in Fukushima prefecture. At the age of five he moved to Otaru in Hokkaido, where he would come to serve as an apprentice to a sign painter.

Saito became infatuated with art after studying drawing with Gyokusen Narita and moved to Tokyo in 1932 to study Western-style painting at the Hongo Painting Institute. He began experimenting with woodblock prints and exhibiting his works with Nihon Hanga Kyokai in 1936.

Saito mainly worked in oil painting until his invitation from Tadashige Ono to join the Zokei Hanga Kyokai in 1938, at which time Saito made the woodblock print his primary medium. He worked with the Asahi Newspaper Company in 1943, where he met Koshiro Onchi. This chance encounter led to an invitation to Ichimokukai and membership to Nihon Hanga Kyokai in 1944.

Kiyoshi Saitos printmaking career was put on hold due to the war. In 1948, Saito exhibited at the Salon Printemps, an event sponsored by Americans for Japanese Artists. At the Sao Paulo Biennale of 1951, Saito won first place for his print Steady Gaze. In competition with Japanese oil painting and sculpture, this was a turning point for Japanese print artists: for the first time in Japanese history, prints overtook painting.

This achievement roused the Japanese art establishment. In 1956, Saito was sponsored by the State Department and the Asia Foundation to travel and exhibit around the United States and Europe. As a sosaku hanga artist, Saitos prints are self-drawn, self-carved and self-printed.

His early works are distinguished by an attention to realism and three-dimensionality. As his style evolved, his prints became flattened and two-dimensional, featuring strong and refined designs with color and texture. The item "ORIGINAL KIYOSHI SAITO HANIWA WOODBLOCK PRINT 1960s OLD VINTAGE JAPANESE MODERN" is in sale since Tuesday, September 14, 2021.