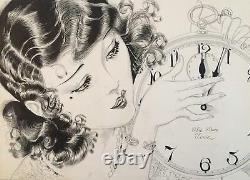 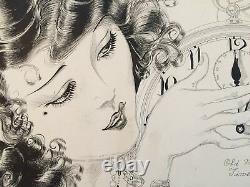 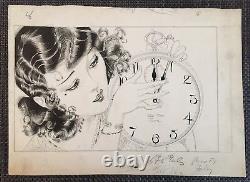 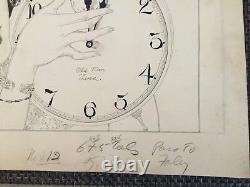 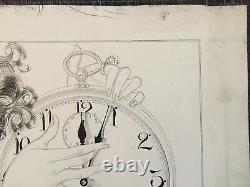 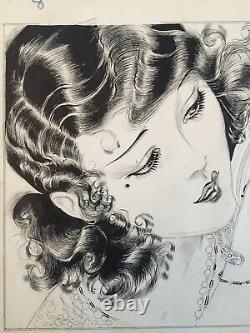 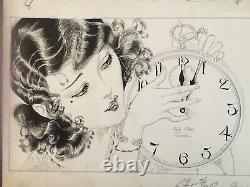 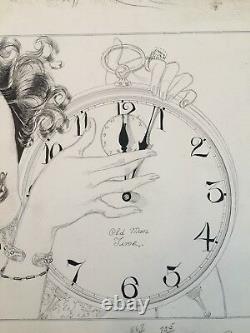 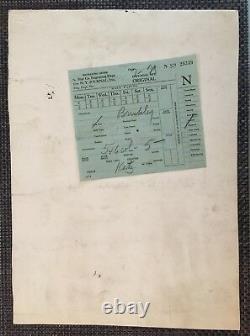 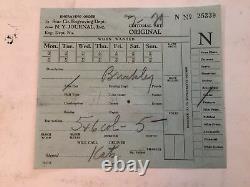 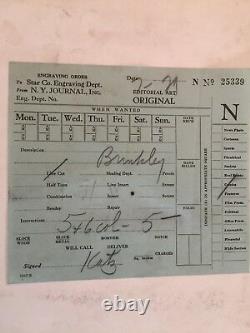 This exceptional Nell Brinkley ORIGINAL Pen and Ink Illustration was done in 1929 for The NY Journal. This Brinkley Beauty is holding up a large clock and adjusting the time. On the face of the clock underneath the dial it reads, OLD MAN TIME. She is elegantly dressed to the nines. Perhaps a New Years party.

Nell Brinkley was born in Denver, Colorado, in 1886 (some sources say 1888), but her family soon moved to the small town of Edgewater on Denver's western border, facing Sloan's Lake at Manhattan Beach. She was not formally trained in the arts, and dropped out of high school to follow her natural talent with pen and ink. As a tot, she drew place-setting illustrations of knobby-kneed kiddies for Mary Elitch's garden parties at Elitch Gardens.

At the age of 16, she was already accomplished at illustration. She illustrated the book cover and 25 illustrations for a 1906 children's book, Wally Wish and Maggie Magpie by A. She was hired to do pen-and-ink drawings for The Denver Post and later the Rocky Mountain News. Her skills were noticed in 1907 by media mogul William Randolph Hearst and his editor Arthur Brisbane. Though barely into her twenties, she was convinced to move from Denver to Brooklyn, New York, with her mother. She began working in downtown Manhattan with the Journal, where she produced large detailed illustrations with commentary almost daily. The newspaper's circulation boomed; her artwork was featured in the magazine section. Brinkley later moved to New Rochelle, New York, a well known artist colony and home to many of the top commercial illustrators of the day. She soon became well known for her breezy and entertaining creations. The curly-haired everyday working-girl drawings were known as the Brinkley Girl, who soon upstaged Charles Dana Gibson's Gibson Girl. The Ziegfeld Follies (1908) used the Brinkley Girl as a theme, and three popular songs were written about her.

Bloomingdale's department store featured a Nell Brinkley Day with advertisements using many of her drawings. Young girls saved her drawings, colored them and pasted them in scrapbooks.

The Denver Press Club greeted her when she vacationed in Colorado in the summer of 1908. Nell was most famous for her representing relationships between boy and girlman and womanBettys and Billies. " Her illustrations used the drawing of "Dan Cupid" to represent the presence of that something most people call "love.

Brinkley's reputation was also established by an early assignment to cover the sensational murder trial of Harry K. She was assigned many interviews with the actress-wife, Evelyn Nesbit. In later years, she covered other infamous murder trials. She produced numerous courtroom illustrations printed in the Evening Journal and other Hearst newspapers. Brinkley had been on the staff of the Journal for only three months when the new trial began.

She had come after two years on the Denver Post, bringing with her a talent for pretty-girl art that had not yet been matured into delicately fine-lined art-nouveau style for which she would become famous. Brinkley christened all the pretty girls she drew "Betty, " and called all the boys "Billy". Brinkley's debut came on November 26th, 1907 and she was featured on a comics page that contained her illustrated panel that accompanied an article on actress Valeska Surrat. Brinkley wrote this article using her usual superlatives ("The Most Beautiful Woman I Ever Saw"), and her next day's subject was Ethel Barrymore.

Brinkley's art was now featured in Hearst newspapers all over the country and Americans were sitting up and taking notice of this new young artist. Brinkley's style of writing was that of the pop culture style of the early 20th century.

At the same time that authors like Jack London and Edna Ferber were creating great literature, writers of the day's best-sellers were, like Brinkley, producing breathless prose filled with run-on sentences and liberally sprinkled with dashes. Brinkley flew with Glen Martin in his new biplane and reported the daring swoopings and the landing for her readers. Brinkley helped with War Bond drives, and she entertained and consoled those at home and the American youth abroad, during and just after World War I. She traveled to Washington, D. Where she interviewed many young ladies who had left their homes to become defense workers.

Golden Eyes with Uncle Sam by Nell Brinkley, c. Brinkley also became known for the charming text that accompanied her stories and reporting while she worked at the Evening Journal and other publications that included Cosmopolitan, Good Housekeeping and Harper's Magazine.

She produced many illustrated theatre reviews and profiles of mothers and young women in society, including later, in the 1930s First Lady Eleanor Roosevelt. Much of her writing promoted the working women of the time, and encouraged the expansion of women's rights. Her work was distributed to newspapers internationally by King Features Syndicate. By 1935, however, photography began to replace illustrations in newspapers. She had become the most prolific and famous romantic writer-illustrator.

Later, she illustrated books and produced topical multi-panel art pages of art. One was collected in a 1943 anthology of comics. In 1944, when large headlines were about the battles of World War II, Nell Brinkley quietly died after over 30 years of entertaining fans from the "most read newspapers, " the major media of her timeshe was soon to be forgotten.

Brinkley, her mother and father are all buried in a New Rochelle, New York cemetery. Brinkley was known for her idyllic designs in her artwork, and her female characters drew attention from readers. In comparison to the staid Gibson Girl stereotype established earlier by Charles Dana Gibson, the Brinkley Girl was feminine, fun-loving and more independent.

Syndicated nationally, her drawing The Three Graces helped establish this character as an icon. The piece, displaying three women singing the praises of suffrage, preparedness and Americanism with regards to love of country, was one of the first to link young, attractive women with the concept of suffrage. Uncle Sam's Girl Shower, by Nell Brinkley, 1917, an image using her iconic Brinkley Girl in support of working women who arrived in Washington, D. Only to find they were denied the ability to rent apartments. The Brinkley Girl was generally a young working woman who was often seen wearing lacy dresses and wearing her hair in curls, engaged in activities that were more independent than the general female standard.

Her work was often considered to have a feminist slant. The Brinkley Girl became a national sensation, the topic of pop songs, poetry and theater. The second Ziegfeld Follies (1908) featured a number of references to the Brinkley Girl, including a song "The Nell Brinkley Girl" by Harry B.

The Brinkley Girls (Fantagraphics Books, 2009) collects Brinkleys full-page color art from 1913 to 1940; her earliest adventure series, Golden Eyes and Her Hero, Bill; her romantic series, Betty and Billy and Their Love Through the Ages; her flapper comics from the 1920s; her 1937 pulp magazine-inspired Heroines of Today and unpublished paintings, along with an introduction by the book's editor, Trina Robbins. Her earliest adventure series, Golden Eyes and Her Hero, Bill, is a serial comic that concerns the adventures of a girl known as Golden Eyes during World War I. The comic ran from March 1918 through February 1919. The series contained full page illustrations that were enriched with color. The series was renamed "Golden Eyes" and Her Hero "Bill" Over There, after only a handful of installments (to reflect that the narrative had shifted to France) and would keep the new name for the remaining 15 covers. The series begins with Golden Eyes having to say goodbye to her lover, Bill, when he is deployed to France to fight the Germans. He leaves his faithful dog "Uncle Sam" in her care, and while girl and dog try to do their part for the allies from home they're spurred into action by the discovery of a German spy in Golden Eyes' own backyard. Golden Eyes, with Uncle Sam at her side, enlists as an ambulance driver for the Red Cross, and they are briefly reunited with Bill in France before duty separates them again. The three are wind up being reunited and separated multiple times throughout the course of the war and the series. They wind up rescuing each other from capture and injury alike as they fight for the allies - and for their future. The serial is notable for its proactive heroine, patriotic underpinnings, and distinct Brinkley art style (which blended elements of Art Deco and Art Nouveau into elegant, sumptuous illustrations that embodied the ideals of feminine beauty in the 1910s). Her last work published was a Sunday series in 1937 titled, Heroines of Today.

This work was thought to have been Brinkley's most interesting and possibly most powerful creation. Given it's time of creation, the series was aimed towards glamorizing women who have taken on multiple roles in their households and women who have made it a point to be an independent from their spouse or lack thereof.

Brinkley used beautiful illustrations to portray these strong women who held powerful titles such as a forest-fire spotter, soldier, police detective, a woman who acts as rescuer when saving four people from drowning, and a "judge queen" who was left to survive on her own in the jungle after her trader husband dies and was able to keep her husband's company going while acting as a nurse and magistrate to the jungle tribes. Her "Woman Warrior" illustration was featured in this Sunday series. With the illustration Nell Brinkley writes about times of war in the Soviet Union.

She writes about the roles that women have taken on during World War II. Women were expected to participate in battle just as men were. Brinkley talks about how women were carrying and using machine guns and operating tanks in Soviet Russia, and present on the fighting lines in war-torn Spain. Brinkley illustrates an Austrian woman named Rosetta Millington. Millington was a Red Cross worker during the war in which she served for over two years.

She was the only woman to gain enlistment in the Spanish Foreign Legion but when it was revealed that Millington was in fact a woman, she was discharged. The item "NELL BRINKLEY ORIG Vintage Pen Ink Illust Old Man Time NY JOURNAL 29 New Year" is in sale since Tuesday, October 16, 2018. This item is in the category "Art\Art Drawings".

The seller is "nonnos_attic" and is located in Bayport, New York. This item can be shipped to United States.