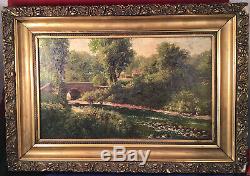 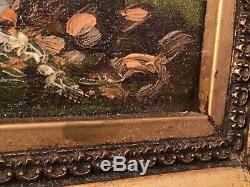 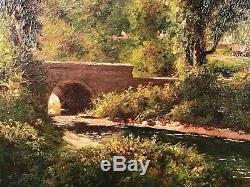 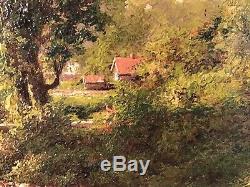 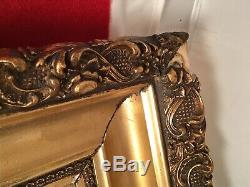 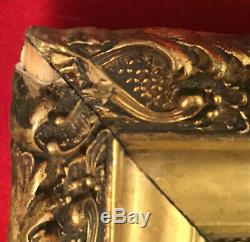 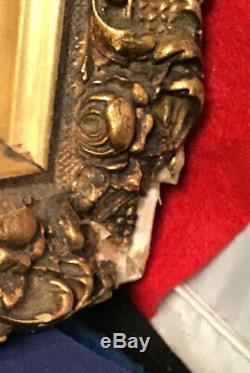 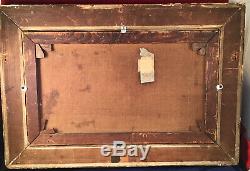 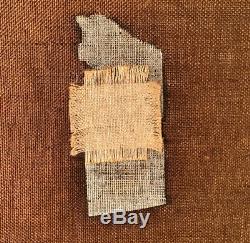 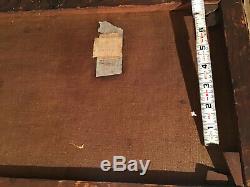 Edan Hughes was one of the people who mistook this as being done by Howard Hulsmann, when it was done by Henry Hulsmann. Signed by Hulsmann on the lower right. Painting's size: 12" by 20". Framed: The 3 1/4 wide and 2 1/2 deep frame measures 17 1/2 by 25 1/2. The frame has some loss to corners and edges (see photos) and has some nicks/scratches. Overall, the frame is in fair condition and with some restoration would be beautiful. Painting's Condition: there is a repair to the painting in the center which has been expertly restored. There are also two small 1/4 tears (see photo of backlit area). Ultraviolet Light Test: No inpainting. Hulsmann's signature is original to the painting and it does not fluoresce under an ultraviolet light.

Henry Hulsmann is the listed German & American author of this peaceful oil painting. Being one of his most peaceful compositions to ever be offered for public sale, this painting should prove to be a fine acquisition for any discerning art collection!

Biography: Henry Hulsmann was born in Germany, February 1, 1849 and came to this country at the age of 19, initially living in Baltimore. He married Albertina Glende in Clinton, Iowa, in 1878.

About a year later the family, which eventually grew to include four daughters and a son, moved to Chicago where the artist became a naturalized US citizen in 1895. Later they made their home in Oak Park and Elmhurst. In 1929 they moved to Belvidere, Illinois, where, after six years of continuing ill health he died on March 26, 1930. Hulsmanns training is presently unknown. He is listed in the censuses for 1900 1920 as living in Chicago, Illinois and his occupation is listed as Artist, Landscape.

His works carried a somewhat distinctive signature: Hulsmann in block letters with a line coming from the last n and extending back under the name. Additionally, one of Hulsmanns daughters, Lillian, was apparently also an artist; in the 1910 census she was living at the family address and is listed as an Artist, Landscape. She married Otto Miller in 1914, but she may have continued signing her name as L. Hulsmann and painted in her father's style. The item "LISTED Henry Hulsmann Impressionist Landscape Old Antique Oil Painting" is in sale since Monday, November 11, 2019. This item is in the category "Art\Paintings". The seller is "fiefdomone" and is located in Edwards, Illinois.

This item can be shipped to United States.