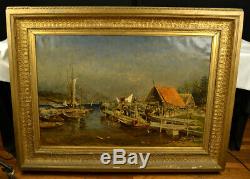 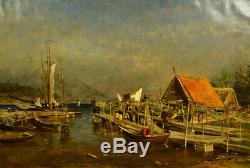 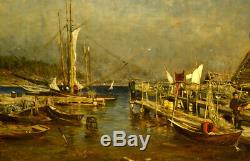 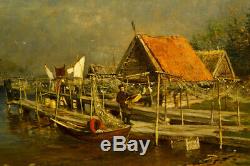 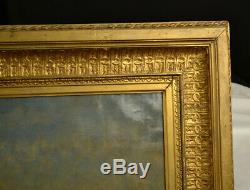 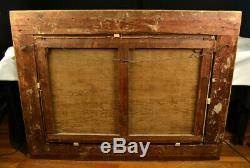 This is an exceptional antique oil painting by famous artist Olof Hermelin dated 1878. This is a large and impressive painting, depicting a harbor with fishing boats, hanging nets, and fishermen on docks along the shore.

The fishing nets are hanging to dry along the 3 docks, with the shoreline and tall, green trees in the background. There are charming fishing shacks and great attention to detail, done in beautiful colors that will be brought out more brightly after cleaning.

This is a large and impressive painting in excellent original condition, has it's thick original, fancy gold gilt frame. It is signed along the dock above the floating crate. This is signed: by the artist O.

Below is the artist's biography as borrowed from askart. Olof Hermelin was active/lived in United States, Sweden. I know that I sought the truth more seriously than most people who make paintings on a daily basis after prescriptions.

It's true to really see nature and then paint as you see. (Olof Hermelin, in a letter from 1877) The above quote from 1877 reveals the seriousness and conviction with which Olof Hermelin attacked the artistic challenges.

However, the quote could as well have been written by another Swedish landscape painter, Carl Fredrik Hill. The two colleagues seem at this time to have shared an intensity in their respective artistic skills that raised them to new levels. The similarity between Hermelin and Hill appears when comparing Olof Hermelin's " Promenating Couple " from 1877 with Hills so famous works " Sister Anna " from the same year. The artists use a common palette here, and also in composition they work with the same means. Both of them allow large, dark trees to the right in the paintings to lean in threat to the women's figures.

The terrifying power of the tree is balanced by a soothing and warming yellow light, but if Hermelin's case is firmly anchored in an open-field open-minded field, it is found at Hill only in the infinity of the sky. Hermelin's footpath becomes a way away from the threatening. The brittle brook in Hills painting does not mean the same opportunity for rescue. Rather, it is an open wound that spaces and keeps the woman. The tone of the collar and hat has, in Hermelin, its equivalent in a gray furnace sky, whose stunning weight is however influenced by the free-flying birds in the distance. These differences in the otherwise related paintings would have their tragic explanation. The two artists work at the time of the painting's arrival at a common goal, the Great World Exhibition in Paris the following year. Certainly Hermelin and Hill are admitted to the exhibition, but at the same time this highlight also means the end of their international careers in different ways.

On January 18, 1878, Hill was taken by comrades to a hospital in Passy. The Hospital stay does not provide any improvement and Hill will never touch a brush again.

In 1880, he may travel to Sweden and after a period of time at various mental hospitals, he stays until his death in 1911 in the parents' home, faithfully cared for by his younger sister Hedda. During these years, however, creation continues, but instead of the brush, color critically becomes his medium in a production characterized by the inner demons of the insanity. Hermelin's fate is not as dramatic. However, he seems, without further explanation, to give up what seems to have been a given place in the international art scene, and instead returning to Sweden. Here he will be a sophisticated interpreter of the Swedish landscape.

Although this more idyllic approach gets the audience's appreciation, the depth and the inner tension of the 1877 " Promenading Couple " are lacking. In addition to the art, he engages in a folkloristic work, where he collects tales and declares and performs archaeological records. One is inclined to see a connection between this total conversion from Hermelin's side and Hills' breakaway insanity disease. The tragic fate that hit the admired colleague must have been terrifying for Olof Hermelin. They had shared the same intense search for true art and, like Daidalos, who saw his son Ikaros fly too loud and disgusting helplessly into the ocean, Hermelin experienced how the high ambitions ultimately caused the young shelter Hill to fall into the crime lakes of the mental illness. Olof Hermelin was quite lonely in his generation to understand and appreciated Hill's artistry early. Hermelin wrote a number of articles in Swedish newspapers in the 1870s, where he defended Hills' groundbreaking pioneer effort in landscape painting. This unusual ability to understand is partly explained by the fact that Olof Hermelin very early received French impulses in his painting. This was done first by his teacher Theodor Billing, who in the 1860s was the only one who represented the open-air Barbizon school in Stockholm. These impulses were renewed and reinforced at Hermelin's Paris visit in 1870 and the longer stay there during the period 1873-76. 1876, Olof Hermelin traveled to the United States as commissioner of the Swedish Department at the World Exhibition in Philadelphia. In connection with the return of 1877, he created the painting " On the Atlantic ", which is one of the first impressionistic scenes in Swedish art.

Like this work, " Promenading couple " from the same year represents a highlight in the artist's career. With the frame, this measures about 42" high, 56" wide and 3 1/2 thick. Without the frame, it measures about 29" high and 43 1/2" wide.

This painting has survived in excellent original condition, with no damage or old repairs. Frame has some shrinkage cracks and missing bits of gesso with gold gilt. The canvas needs to be re stretched in the upper corners. The painting some light crackling and needs to be cleaned.

This weighs about 44 lbs. On expensive fragile items, we may need to double box them.

This will require additional labor and material costs. EVERY ITEM IS GUARANTEED TO BE THE ONE SHOWN IN MY IMAGES.

I sell mostly antiques and collectibles, which will usually have the normal wear that you would expect to occur from normal use and age. I will mention anything I find objectionable in the condition report above. If the listing ends over the weekend, you will normally receive an invoice on Monday. You will need to save the box and packing materials to show the shipper.

This is the proof that they require, so if you discard the packing materials, your claim may be denied. Shippers do not accept parcels packed in damaged boxes as a rule, so damage is normally evidenced by damage to the box. The item "ANTIQUE OIL PAINTING FISHING BOATS LISTED SWEDEN ARTIST OLOF HERMELIN OLD" is in sale since Tuesday, February 12, 2019. This item is in the category "Art\Paintings".