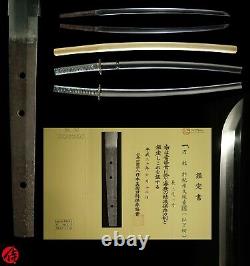 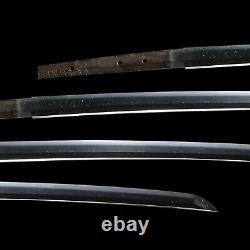 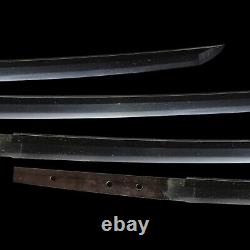 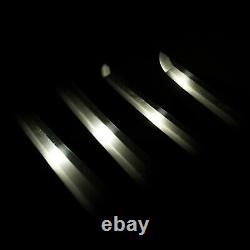 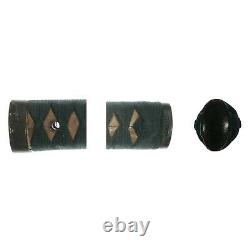 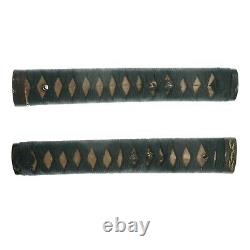 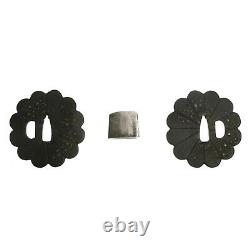 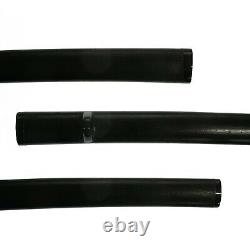 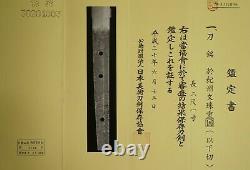 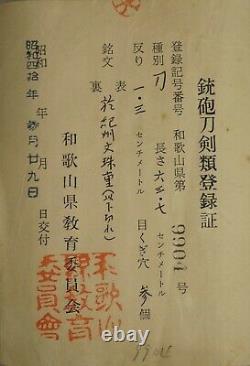 1.3 cm(0.51 inches). Based on the signature and authentication paper, we believe the second-gen Shigekuni forged this blade. He is also known as Monjyu Shigekuni, as he often inscribed "Monjyu" when he signed on his work. He forged swords during the early Edo period. The swordsmith's name "Shigekuni" lasted 11th generations from the early Edo period(1615-) to the late Edo period(-1868). Shigekuni served the Kishu Tokugawa clan in the Kishu region(Wakayama), direct linage from the Tokugawa clan, who ruled the Edo government. Kishu Tokugawa clan is known as GOSANKE, which is eligible to take over Shogun's position. Shougun is the supreme head of the military government ruled by Samurai warriors in Japan's medieval times.

The first generation Shigekuni is called Nanki Shigekuni and is known as one of the greatest swordsmiths in the SHINTO erathe swords created during. It is said that the second-gen Shigekuni forged swords for Tokugawa Yoriyoshi, the 10th son of Tokugawa Ieyasu, the feudal lord of the Kishu region. You can see the great sword-forging technique inherited and learned from his father, Nanki Shigekuni. This blade is appraised as Hozon certificate issued by NBTHK. This authentication paper was only given to Japanese swords, worth preserving by Nihon Bijutsu Touken Hozon Kyokai(the Society for the Preservation of the Japan Art Sword).

The blade pattern created by the tempering process. Visible surface pattern on the steel. Nakago is the tang of the Japanese sword. Japanese swordsmiths left the black rust on the tang because it prevents red rust while the tang is in its handle. And the discoloration of the tang was created over time, and it is a great indicator for a Japanese sword specialist to estimate when the sword was forged. Koshirae is the mounting of the Japanese sword. There are several parts that consist of Koshirae such as Saya(Sabbard), Tsuka(Handle), Tsuba(Handguard). A pair of matching sword fittings that cover the upper and bottom parts of its sword hilt. Tsuka is the handle of the Japanese sword and Menuki is its decoration. Samehada(Stingray skin) is applied on the surface of Tsuka. Saya is the scabbard for the Japanese sword. NBTHK Hozon Certificate for the blade. NBTHK, also known as Nihon Bijutsu Touken Hozon Kyokai (the Society for the Preservation of the Japan Art Sword), is one of the oldest Japanese sword appraising organizations in modern-day Japan. They authenticated the blade on June 13th in the 30th year of Heisei (2018). They appraised it as Hozon Touken, the blade worth preserving for Japanese society. The purchaser will receive this original certificate as well. The Board of Education in Wakayama prefecture issued a registration paper for this sword. In order to obtain this paper, the sword needs to be traditionally hand forged. With this paper, its owner can legally own an authentic Japanese sword in Japan. We will send this paper to the board of education once the sword is exported. The purchaser will receive a copy of the registration paper.

Antique Japanese Sword and Export process. Japanese sword is registered under t. He Agency for Cultural Affairs and.

The Board of Education in Japan. They issue a registration paper for each Japanese sword for the owner in Japan to legally possess it. It normally takes around 1-1.5 months to receive.

And we would like you to expect at least 2-3 months for your order to arrive at your given address after you ordered. USA, Canada(BC, AB, ON), Mexico, Australia, UK, Germany and France. As long as we can send antique Japanese swords by either EMS or UPS(USA only). We use package cushioning to protect the item and put it in a PVC pipe, which is one of the most secure packages because of its durability. It will normally takes 5-14 days for the item to arrive at your given address after we dispatch it.

Please note that your use of e-bay is governed by the following terms. These Terms are between you and Samurai Museum and govern our respective rights and obligations. We deal with original edged samurai swords, which might be dangerous if wrongly used. Samurai Gift is not responsible for any lost package that is incorrectly addressed due to customer error. Please also bear in mind that damage or loss caused by custom or post office is beyond our control.

Thank you for checking our item. TO CHECK MORE ANTIQUE JAPANESE SWORDS FOR SALE. The item "350 years old Edo Period Antique Katana signed by Shigekuni with NBTHK Hozon" is in sale since Thursday, November 26, 2020. This item is in the category "Antiques\Asian Antiques\Japan\Swords". The seller is "samuraimuseum888" and is located in Shinjuku. This item can be shipped to United States, Canada, Mexico, Germany, Japan, France, Australia.